Are low carb diets good or bad for your thyroid? It’s certainly a controversial issue with many well respected practitioners and nutritionists not always agreeing.  Some claim that low carb is the holy graille of weight loss and the path to optimal health, while others condemn the diet for wrecking their thyroid and causing hormonal chaos.  Who is right? The issue is a nuanced one with a few factors at play.

What does the scientific data tell us?

Very low carb diets like the ketogenic diet (usually under 50 grams of carbs per day), has been shown to slow thyroid function in both children and adults. The findings indicated that the lower the diet was in carbs, the more T3 hormone levels were lowered.  T3 is the active thyroid hormone that the body can use. When levels are too low (as in the case of classic hypothyroidism or “sluggish thyroid”) one can feel tired, depressed, cold and more easily gain weight. 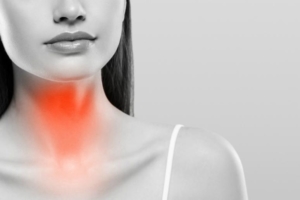 So, did the study participants experience symptoms of lowered thyroid function after following a very low carb diet?  The evidence from a number of large randomized low-carbohydrate or ketogenic diet studies published in the last decade, lasting between three months and two years, indicated that out of 350 closely monitored participants, there was not a single case of hypothyroidism reported, despite lowered T3 levels.

What’s the deal? Levels of thyroid hormone definitely decrease on a low carb diet, but why isn’t this phenomenon resulting in impaired thyroid function? One hypothesis is that when the body is in a state of ketosis, improvements in cell structure and function occur, which enables the body to become more responsive and sensitive to these hormones. As a result, it can function normally at lower T3 levels.  In other words, it takes less hormone to produce the same effect.

The next question to explore is whether or not low carb diets are a good choice for those with existing thyroid issues? The answer is, “Yes – but proceed with caution ”.  One needs to be aware of the potential pitfalls and how to avoid them. Armed with the right info there is no reason one cannot reap all the benefits of a low carb diet, while ensuring one’s thyroid function isn’t affected. If done incorrectly, there is a good chance you will run into problems.

The thyroid requires glucose to produce the hormones T3 and T4, and to convert these hormones from the inactive to the active form. When carbs are too low, hormone production and conversion slows down. This can worsen a hypothyroid condition, including autoimmune thyroid diseases like Hashimoto’s.  A very low carb diet can also put major strain on your adrenals. Perimenopausal women, stressed individuals  and those with thyroid dysfunction often experience issues with keto because their adrenals are already shot.

Recommendation:  Don’t aim for a ketogenic state, but rather keep carbs low-to-moderate (between 50 and 100 grams for weight loss and 100 to 150 for weight maintenance. ) You can still enjoy all the benefits of a low carb diet, such as improved blood sugar balance, weight loss, reduced cravings, controlled appetite, normalised blood pressure and better quality sleep to name a few.

The other mistake people make when going low carb is that they cut carbs out of their diet too suddenly.  This can be stressful on the body, triggering the production of another thyroid hormone known as Reverse T3. This hormone, as its name suggests, does the complete opposite of its active T3 counterpart. Reverse T3 prompts the body to store fat, become sluggish and tired and can depress mood. It can also interfere with healthy insulin function, leading to increased belly fat.

Recommendation:  Adopt a low carb diet gradually. Let your body adapt one meal at a time. This is also a helpful tip to avoid “low carb flu” symptoms such as dizziness, nausea and headaches, which affects many when first going low carb.

While carbs are important for thyroid hormone production, this doesn’t mean one can indulge in poor quality carbs such as refined grains and sugar. Telling yourself, “I need that doughnut for my thyroid”, just isn’t going to fly. In fact, grains can be very damaging for those with Hashimoto’s (an auto-immune thyroid disease). There really is no need for grains in the diet. Gut health is vital for thyroid health and your gut is very much affected by the foods you eat. The key is to avoid inflammatory and toxic foods that damage your gut lining (leaky gut) and disrupt thyroid function. The worst offenders are sugar, gluten, grains, legumes, soy, dairy and processed foods.

Recommendation:  Get your carbs from starchy tubers like butternut , carrot and sweet potato as well as a little fruit like berries.  Always eat carbs together with protein and fat. Eating carbs on their own can potentially lead to insulin issues in people who already have dysregulated hormone function.

(4) Reducing calories too drastically for too long

One of the better known benefits of a low carb diet is appetite suppression. You just aren’t as hungry and cravings are reduced. This is what helps people create the calorie deficit required for weight loss to occur, without the hunger associated with conventional calorie controlled diets. When calories are reduced too drastically, the body tries to protect itself by slowing down the thyroid and other metabolic machinery. It does this to ensure that body fat levels can be preserved for the famine ahead.

Recommendation:  Aim for a realistic calorie deficit to enable weight loss of between 0.5 and 1 kg per week. If you are hungry, eat.  There is nothing wrong with having 3 meals a day. Missing the occasional meal or eating in an 8-hour window is also fine, but don’t deprive your body of adequate fuel for too long.  Women have to take special note of this as a woman’s body is far more sensitive than a man’s to a disruption in calorie intake.

When adopting a low carb eating plan, be sensible and in tune with how you are feeling.  If you hair starts falling out 3 months in and you are struggling to drag yourself out of bed, consider that you may have gone too low in carbs, or calories or both. Perhaps you adopted a low carb diet too quickly. Very often adding in some roasted sweet potato at your evening meal will get you feeling much better in no time.

Hit a weight loss plateau? Instead of getting even stricter with carbs and calories, do the opposite and have a little more. As counter-intuitive as it may sound, it has been shown over and over to be a very effective strategy that can get things moving in the right direction again.

Keto can be a very therapeutic approach for those that medically need it, but is not required for fat loss. It also comes with the potential for side-effects if one doesn’t do it properly – especially if you are women and/or have an existing thyroid problem   There is nothing wrong with staying in the safe zone and taking a more moderated and gentler approach to carb restriction. You can still reach your goals and will probably enjoy the journey a lot more too.  Even if you have a fully functioning healthy thyroid, the above recommendations can be adopted and the benefits enjoyed.

Article written by Nicky Perks for Lose It magazine (Volume 28)

Want to join the discussion?
Feel free to contribute!

Our coaching programmes, consultations and support groups are for educational and informational purposes only, and merely seek to help the client understand the Banting approach to eating and weight loss. Banting Buddies coaches do not dispense medical advice, make diagnoses or treat medical conditions. People are to use the information provided by Banting Buddies at their own discretion. Neither the coach nor Banting Buddies can be held liable for any outcome resulting directly or indirectly from the coaching process. If you suffer from a medical condition, it is suggested that you speak to your doctor before starting one of our programmes. The coaching relationship is about you, the client, taking full responsibility for your actions, and your health. Banting Buddies do not guarantee any results.